"The public will our guide, the public good our end" - Masthead of the Northern Star

Wilson’s Court is one of the short alleyways known as The Entries which link High Street and Ann Street. Most Belfast people do not know of its existence and it is a rather dank place, which suffers from neglect. Yet it was in an office in this dark alleyway that a famous newspaper was once published- The Northern Star.

The radical Presbyterian businessman Samuel Neilson founded the paper in 1792 and for five years it engaged in an uncompromising campaign of criticism of the British government’s policies in Ireland, advocating freedom, equality and brotherhood.

The Northern Star supported the United Irishmen and called for greater religious tolerance, the end of unwarranted English ‘meddling’ in Irish affairs and the creation of a three hundred seat parliament on the island, in which all men could have the vote. By 1797, as the country lurched towards revolution, the printing press that produced the paper had been closed down for good by a government that had implemented martial law.

However the memory of this remarkable journal lived on. When the son of one of the United Irishmen went to England and joined the Chartist movement, which called for a universal vote, he called his radical newspaper The Northern Star. 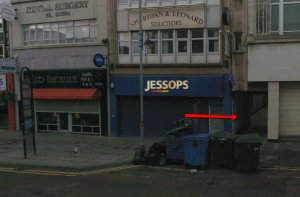 The location of Wilsons Court

The Chartists were crucial figures in the long, imperfect evolution of British democracy.

So Wilson’s Entry was indeed a birthplace of modern values. A pity then that it lies unvisited by tourists and unkown to most locals, who owe many of the freedoms they take for granted today to crusading newspapers such as the one that was published there over two hundred years ago.

Wikipedia articles on the Northern Star