Remembering a local lad who Competed at the 1936 Games… 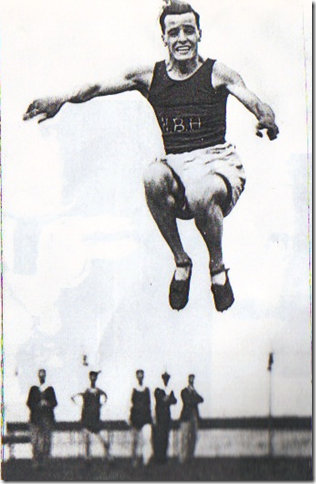 With the torch for the London Olympics now travelling through Northern Ireland, it’s appropriate to remember North Belfast Harriers’Eddie Boyce, who competed at the 1936 Berlin Olympics. Boyce was also a bronze medallist at the 1934 Empire Games (now Commonwealth Games).

He joined North Belfast Harriers as a youth at Divisview Hall, Cliftonville Circus where he became a stalwart of the club and excelled in both the long jump and the hop, step and jump.

At the age of twenty-one, during an athletic meeting organised by North Belfast Harriers at Dunmore Park on 4 July 1934, he broke the British (native) record for the hop, step and jump(triple jump) with a jump of 48 feet 5.5 inches.

He followed to win the AAA hop, step and jump championship on 13 July 1934 and less than a month later at the same venue, white city London, he won the Empire Games bronze medal. This set him on his way to the 1936 Berlin Olympics where he got through to the top six and, after injuring his heel, ended up in hospital. In 1939 he won the All Ireland long jump title.

Following his distinguished athletic career he played goalkeeper for Belfast Celtic II, Glentoran, Linfield and many others.

He finished his sporting career by being a winning team member of Lisburn golf club which won golf’s Ulster cup in 1968.

North Belfast Harriers maintain a display cabinet about Boyce in their clubhouse. Arthur Briggs (California, USA) a life-long member of the club since 1951, donated the display cabinet. It takes pride of place in the clubhouse and in it there is memorabilia from Boyce’s much decorated career. It includes a full panoramic picture from the 1936 Berlin Olympics, opened by Hitler, and the jacket which Eddie Boyce earned for competing in those Olympics.

← Leave us a comment and say hi!
Old Photos Of Belfast Parks →