On the few occasions that the sun shines in Belfast, people throng to their nearest park. Here we look at some photos of how our parks looked a century ago. Notice there is not a naked sunburned beer belly or bottle of Budweiser in sight

I have recently started doing the free 5km weekly Park Runs, I strongly recommend them to anyone looking for a free and easy way to get fit. They have the races every Saturday morning at 9.30am in the Waterworks, Falls Park, Victoria Park, and Queens.  There is people there of all ages and you can walk it if you like. Anyway I was extremely impressed with how well most of the Belfast public parks where looking. The sun was shinning, the flowers were in bloom, the council park workers are doing an excellent job. If you have not been in your local park recently, do make the effort to pay it a visit.

Anyway I thought it would be fun to look through the archives for old photos of our parks. Here is some great photos of various Belfast Parks. They are taken from the National Library of Irelands Online Photo Collection.

Isn’t this photo amazing? Before decades of vandalism took its tool this was once a beautiful park. They are soon starting a 2 million pound refurb program in the Dunville Park, so lets hope the local hallions leave the new version alone.

Dunville Park was the first park in Belfast to be donated as a gift to the city. It was presented by Robert G Dunville to residents in 1891.

The Dunvilles were a wealthy family who were well known in Belfast in the 19th century. They were famous for their distillery, which was located on the Grosvenor Road. The distillery had a fermenting capacity of more than 500,000 gallons and it produced Dunville Irish Whiskey.
Robert G Dunville was keen to contribute to Belfast’s development and, in addition to his donation of land, he also gave £5,000 towards the laying out of the park, more than £1,000 for railings and £665 for a fountain.
A further £1,150 was spent on a gate lodge, which originally stood at the Grosvenor Road entrance to the park.

The lodge contained a number of shelters and swings for children and was built for the park superintendent. Dunville Park contains a beautiful Victorian fountain designed by AE Pearce, who built a similar structure in Glasgow, Scotland.
The fountain was constructed with buff terracotta and has panels showing aquatic life near its base. It bears an inscription – “the park formed and completed, was presented as a free gift to the city by Robert G Dunville of Redburn, 1891”.

Sadly, the fountain is no longer in working order. Dunville Park was officially opened in 1892 by the Marquis of Dufferin and Ava.

During his speech, the Marquis referred to the benefits a new public park would bring to workers from the nearby distillery. He said “that the provision of such a park in an industrial area was symbolic of a new era when employers would think not only of the housing and sanitation of their workers but of their recreation as well”.  (Source: http://www.belfastcity.gov.uk/parksandopenspaces/parks/dunvillepark.asp) 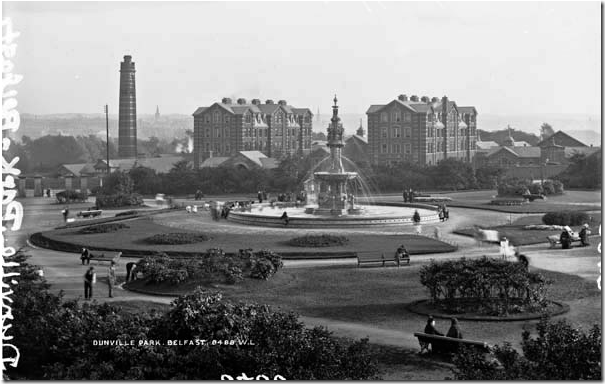 Victoria Park, situated in east Belfast, opened in 1906. One of the park’s biggest attractions is its lake, which was originally used for boating.

Notice the ship in the background. 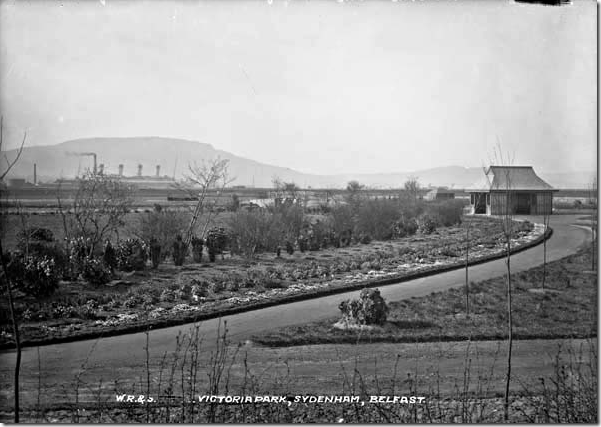 Located in north Belfast, opened in 1888 and was named after Princess Alexandra. 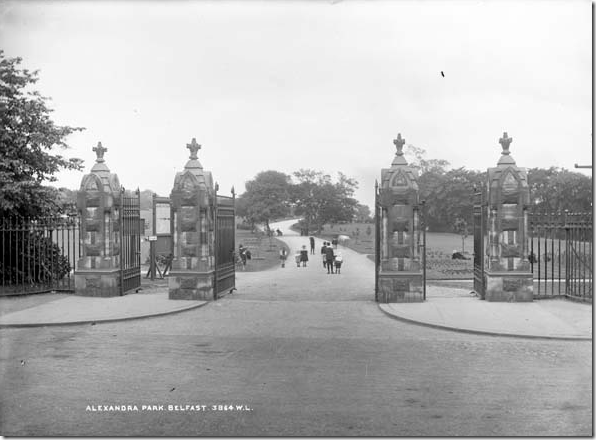 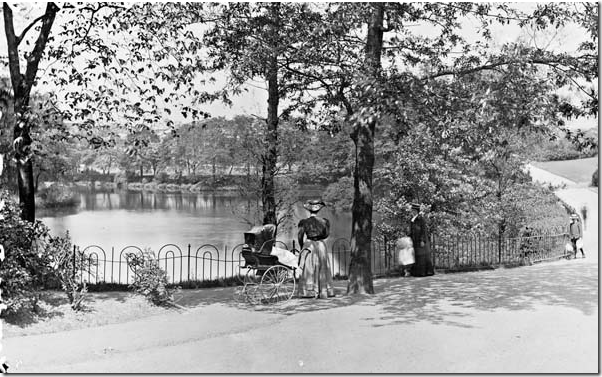 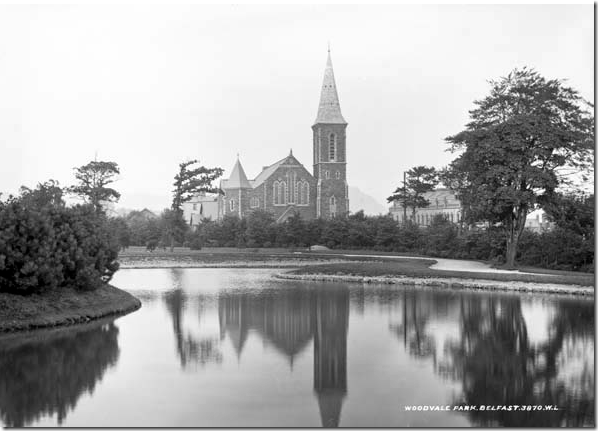 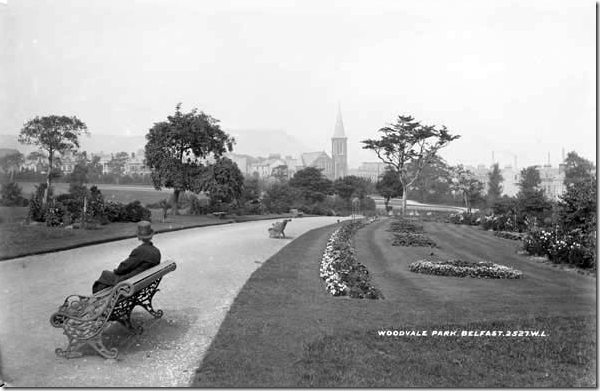 Ormeau Park was originally home to the Donegall family, who lend their name to some of Belfast’s most famous streets, such as Donegall Quay and Donegall Place.

The Donegall family moved to the park in 1807, setting up home in Ormeau Cottage. The second Marquis of Donegall eventually extended the building and lived there until his death in 1844. However, as the family’s debts continued to grow, they were forced to sell their estate to the Belfast Corporation in 1869.

Ormeau Park was officially opened to the public in 1871, making it the oldest municipal park in the city. The opening was marked with a parade from Carlisle Circus, followed by speeches in the park which were heard by a large crowd.

The public were also encouraged to submit their ideas for designing 100 acres of the site. The competition was won by Timothy Hevey, a 24-year-old architect from Belfast. His design can still be seen in the park today, although one or two changes have been made to his original ideas since then. (Source: http://www.belfastcity.gov.uk/parksandopenspaces/parks/ormeaupark.asp) 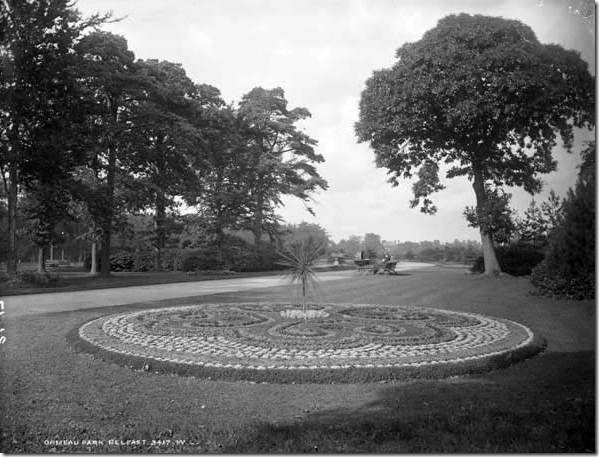 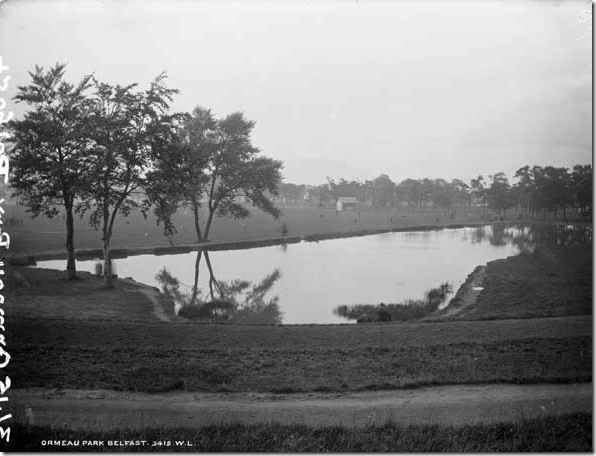 In June 1866, Belfast Corporation (now the council) purchased 101 acres of land on Falls Road from the Sinclair family. Some of the land was set aside for the building of Belfast City Cemetery but the rest was earmarked for a new park.

However, because the land initially fell outside the Belfast city boundary, the area was not considered a public park until the Public Parks (Ireland) Act was passed in 1869.

The area now known as Falls Park was eventually established in 1873.

In 1924, an outdoor swimming pool, known locally as the Cooler, was added to the park. It cost £3,000 to build and was fed by the Ballymurphy Stream which still flows through the area today. The pool closed in 1979 for public health reasons. 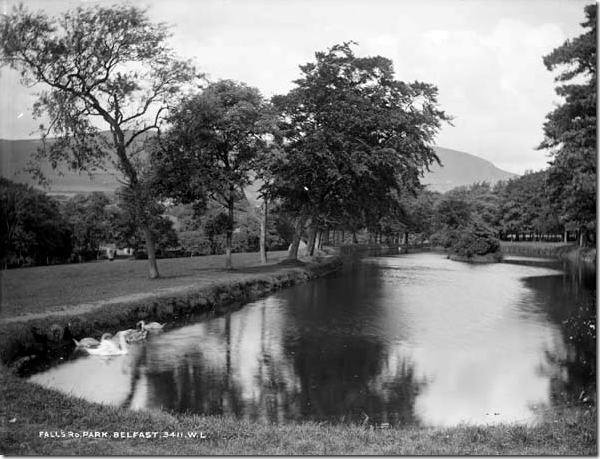 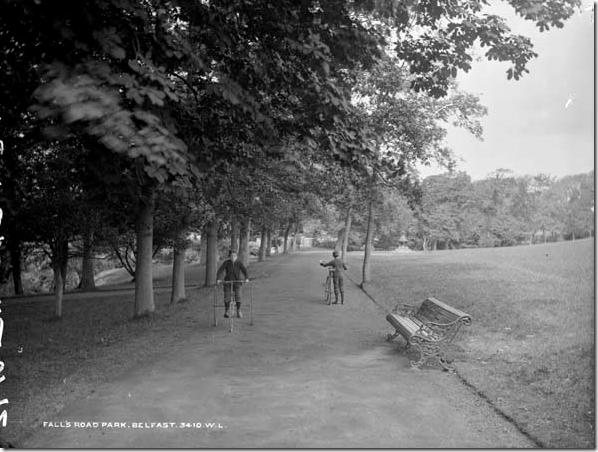 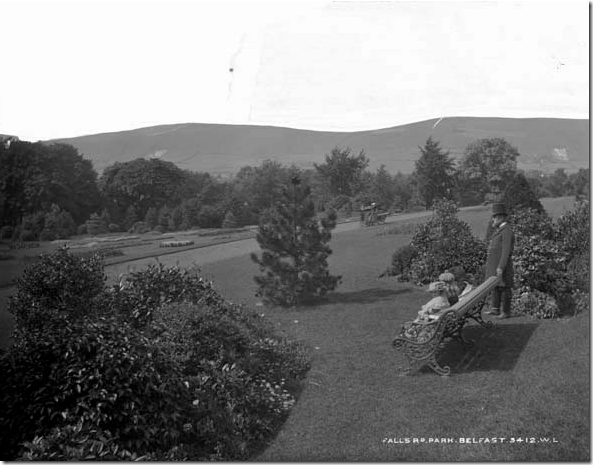 Unfortunately for the Society, the gardens proved expensive to run and many shareholders felt that the park’s horticulture was compromised by financial issues. The site was eventually sold to the Belfast Corporation (now the council) and it re-opened as a public park, known as Botanic Gardens, in 1895.
Today, the park is popular with residents, students and tourists and is an important venue for concerts, festivals and other events.

The Palm House is one of the earliest examples of a glasshouse made from curved iron and glass. It shows how advances in glasshouse technology allowed horticulturists to grow exotic plant species during the Victorian period.

The building was designed by Sir Charles Lanyon, who also helped design parts of nearby Queen’s University. The foundation stone was laid in 1839 and the two wings were completed in 1840 by leading ironmaster Richard Turner. The dome was added in 1852.
Like the Palm House, the Tropical Ravine shows how technology allowed gardeners to cultivate unusual species in a greenhouse environment. The ravine was built by the park’s head gardener, Charles McKimm, and his staff and was completed in 1889. It now contains flowering vines, tree ferns and a variety of exotic plants. (Source: http://www.belfastcity.gov.uk/parksandopenspaces/parks/botanicgardens.asp) 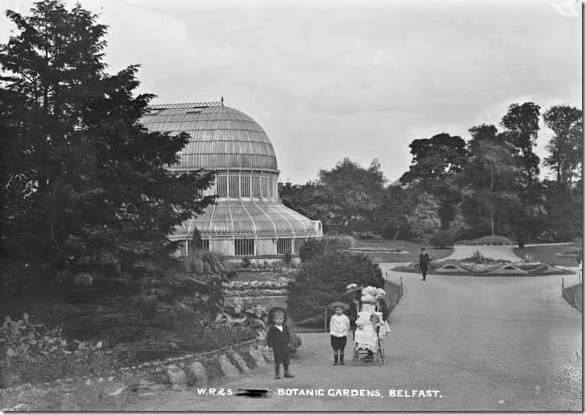 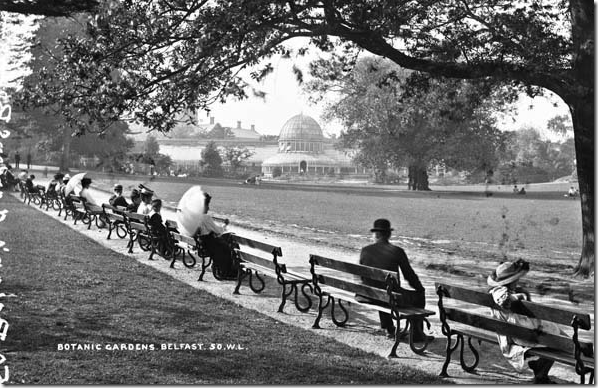 What do you think of these photos? What are your memories of Belfast Parks? Did you go swimming in the cooler? Chase the ducks at the waterworks? Use the comment box below to share your memories.

One Response to Old Photos Of Belfast Parks