Happy Birthday to Belfast! 2013 marks the 400th anniversary of the granting of Belfast’s City Charter. There is going to be a lot of candles on that cake 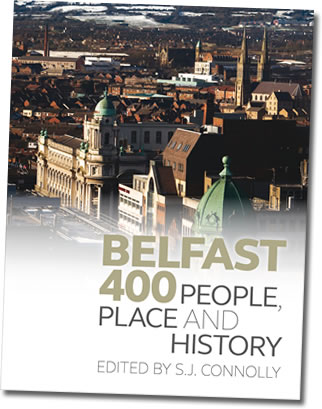 To celebrate the occasion a new book has been published by Liverpool University Press. I was lucky to get an early copy and it really is a great read.

The book is full colour with lots of beautiful photos of Belfast throughout the years. At nearly 400 pages there is some great reading in it.

For my money it would make a perfect christmas present for the history buff in your life.

The book can be bought from Amazon | Liverpool University Press and it should also be available from Easons, Waterstones etc.

Below is some information on the book the publisher sent me:

Belfast 400: People, Place and History  will be published in November to mark the 400th anniversary of the granting of Belfast’s City Charter.

The most comprehensive history of Belfast will be published in November 2012 by Liverpool University Press, and officially launched at City Hall, Belfast on 24th January 2013. Supported by Queen’s University Belfast and Belfast City Council, Belfast 400, People, Place and History tells the story of the city’s unique urban history and has been published to mark the 400th anniversary of the granting of Belfast’s City Charter in 1613.

Beautifully produced and illustrated, Belfast 400 has been written by a team of experts on the city’s history: historians, archaeologists, geographers and social scientists from Queen’s University and NUI, Maynooth, led by Professor Sean Connolly from QUB’s School of History and Anthropology.

The project was awarded a grant of £60,000 by the Leverhulme Trust and has been three years in the writing. It explores the full range of developments in Belfast’s urban history, from its emergence as a settlement, through its rise as an industrial town, through urban decay and renewal.

The book looks at how Belfast, which began as a settlement at a waterlogged river mouth, developed into one of the world’s great centres of shipbuilding and linen manufacture – and the effects of this industrialisation and its subsequent decline on its citizens. It asks how the city of Belfast can now redefine its identity, and the still often fraught relationships that exist between different sections of its population, to face the challenges of the twenty-first century.

Editor of the book and Professor of Irish History at Queen’s University Belfast Sean Connolly said: “This is one of those opportunities that comes along once or twice in a career. Over the past few years specialists in several fields have started to show us just how much there is to be discovered about Belfast past and present. I have been very lucky in being given the opportunity to pull the results of all that work together into an overview that should make anyone interested in Belfast look at the city in a new light.”

The Lord Mayor of Belfast, Alderman Gavin Robinson, commented: “There have been many books written about our city’s rich history, but this is undoubtedly the most ambitious, and also the most timely, coinciding as it does with the 400th anniversary of the granting of the original charter. It will be a worthy addition to the canon of literature on our city, and no doubt will be essential reading for everyone with an interest in the story of what has made the Belfast we know today.”

For media and sales enquiries and review copy requests, contact Jenny Howard, Sales and Marketing Manager on +44 (0)151 794 2234 or jennifer.howard@liverpool.ac.uk