In this article T. Leinad shared some facts about the area around St Peters 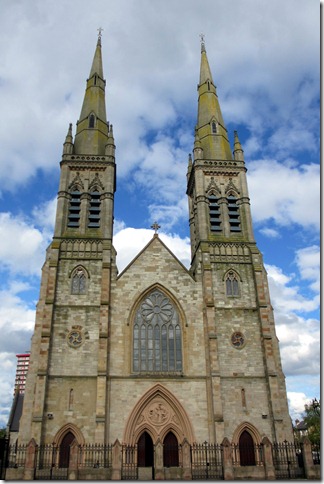 Before redevelopment, Saint Peter’s parochial hall was in Christian Place. This rather gloomy building had a small entrance or foyer with a mosaic floor in which the word, “Tivoli”, was inserted. This hinted at a former and more glamorous use.

The building began life in the early 1900s as a cinema. It was known as, “The Tivoli Picture House”, and was owned by Mr P. Kelly a local publican. Later it became, “The Tivoli Palais de Danse”. By 1950 it had been purchased by the parish and served as the venue for many parish activities and fund raising functions. It housed plays and film shows, dances and socials, bazaars and jumble sales, all part and parcel of parish life in the post-war years.

The Morning Star Hostel for homeless men, which was run by the Legion of Mary, stood in Divis Street at the corner of Dover Street. It was formerly the home of John Alexander, a wealthy mill owner, and then a police barracks before being taken over as a hostel. Another parochial building with a past was the club for the deaf and dumb in Bread Street. During the war it functioned as a dance hall under the title of, “The Coco Nut Grove”.

Many of the former streets in the parish took their names from prominent industrialists. John Alexander was a local mill owner who had a house in Milford, Co. Carlow. He gave names to Alexander Street West, and Milford Street. Ardmoulin Street was named after Ardmoulin House, the residence of the Chartres family. Craig Street, the subject of many jokes because it had only two houses, no end house and was a cul de sac, was called after the Craig family who owned the New Northern Mill at the corner of Northumberland Street. Dunville Street was named after the Dunville family who were whiskey distillers, and Sorella was a daughter of the family. William Ross gave his name to Ross Street and named Dunlewey Street after the Donegal town where he had a residence.

Many streets betrayed the age in which they were built, e.g. the Crimean war. Sevastopol, Odessa, Alma, Omar, Inkerman, Cyprus, Bosnia, Servia, Roumania, Belgrade, Osman, Varna, Balkan, Plevna, Sultan, Balaclava, Raglan. Peel and Derby were British politicians of the same period. Pound Street was near to the pound for stray cattle. Albert Street called after Prince Albert, was formerly named Quadrant Road, possibly because of its shape on a map. Quadrant Street had a similar configuration.