Hidden Belfast Book Only £8.50 At The New Easons Belfast Store…

Your chance to get this great book at a bargain price…. 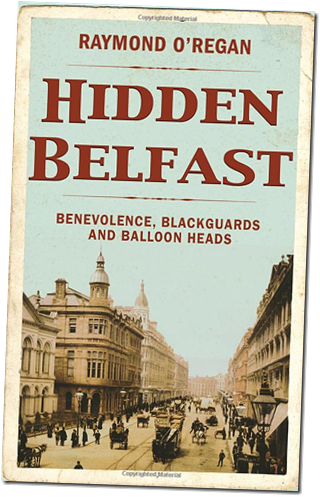 Raymond O’Regan just emailed me to let me know that Easons just bought 200 copies of his wonderful book ‘Hidden Belfast’.

They will be selling it for the promotional price of only £8.50 at their new Belfast store in Donegal Place (the old WH Smith store). The book normally retails at £17.50, so this is quite a saving.

To quote from the cover:

Hidden Belfast highlights some of the unique and quirky elements of the city’s past, and tells the stories of some fascinating rogues and scoundrels that history has overlooked. Discover the intriguing stories behind characters like Bruce Ismay, (Managing Director of the White Star Line, who ordered Harland and Wolff to reduce the number of lifeboats on the Titanic from 48 to 16 because additional lifeboats would obscure the view of the first-class passengers), the infamous Sir Edward May and his equally infamous son-in-law (the second Marquis of Donegall, who had a reputation of not paying his bills and became known as ‘Lord Done ’em all’) and Waddell Cunningham (who in 1786 attempted to set up a Belfast Slaveship Company). Other tales include well-known figures who are associated with Belfast like The Duke of Wellington, Dean Jonathan Swift, Anthony Trollope, James Sheridan Knowles, Sir John Soane (Architect of the Bank of England), James Murray (discoverer of Milk of Magnesia), Dunlop (inventor of the pneumatic tyre), Litvinov (Stalin’s Foreign Minister) and Chaim Herzog (the longest serving President of Israel). Their stories show Belfast to have been a place of learning and radical views, especially in the Nineteenth Century when it embraced the industrial revolution and became a world leader in shipbuilding, linen and cigarette production.

Raymond O’Regan was born and brought up in Belfast and is a lecturer in Irish History at Queens University. He has contributed to a variety of television and radio programmes, for both RTE and the BBC. He has contributed to national and regional media programmes and has lectured on the ‘Troubles’ in America while producing four historical books with Queens University: Samuel Neilson: The Forgotten Patriot, A Celebration of the Centenary of Queens University, A Short History of Belfast from 668 to the Present day and A Selection of the Correspondence from Dr. William Drennan to his Sister Martha He also worked on two other books, Celebrated Citizens of Belfast and Enduring City: Belfast in the Twentieth Century which were published in 2006.

The book is a very easy read and makes a great present. So check out the new Easons store, they spent over a million doing it up, it has a cafe and everything.

You can also get the book from Amazon (5 Star Reviews) and it is also available on for the kindle.