Going for a wash at the Falls Baths…

The Falls Baths-A Memory. In the days before universal indoor plumbing, those who wished to maintain a reasonable standard of personal hygiene regularly patronised the public hot baths provided by the Corporation at the Falls Baths. On payment at the window, the prospective bather was provided with a ticket, a small piece of red carbolic […]

In the days before universal indoor plumbing, those who wished to maintain a reasonable standard of personal hygiene regularly patronised the public hot baths provided by the Corporation at the Falls Baths.

On payment at the window, the prospective bather was provided with a ticket, a small piece of red carbolic soap and a white cotton twill towel, which proclaimed in large white letters on a red stripe that it was the property of The Belfast Corporation. Clutching these he proceeded to an inner area where if the baths were busy he joined a queue of like- minded and similarly burdened souls on a long wooden bench.

When called, he proceeded to the bathing cubicles and entered the vacant one indicated by the open door and the presence of the attendant. The latter carried a bucket half filled with pieces of the same red carbolic soap, and a long bristled whitewash brush. He walloped the brush in the soap and then repeated the same movements round the sides of the bath to remove the ring left by the previous occupant. A quick rinse and then he stopped up the plughole and admitted the quantity of hot water permitted, using a key that fitted on a square knob at the end of the large white enamelled bathtub. Then taking the ticket, he left slamming the door behind him.

The customer was then free to undress, leave his clothes on the slatted wooden bench, add as much cold water as his senses dictated and proceed with his bath. The square knob at the end of the bath was large enough to turn with a tight grip so there was no need to let the water go cold, but a long luxurious soak was not encouraged for if customers were waiting the attendant would bang on the cubicle door, address the bather by number and demand to know if he was finished. The most uncomfortable part of the experience was dressing and leaving the hot steamy atmosphere to face the cold fresh air outside for the towel was never sufficient to dry one completely.

Patrons of the swimming pool were issued with a similar towel and a pair of swimming trunks consisting of two triangles of rough red material emblazoned with the name of the Corporation. Two corners of the triangles had been sewn together while the third had tapes for tying the pants at the side. 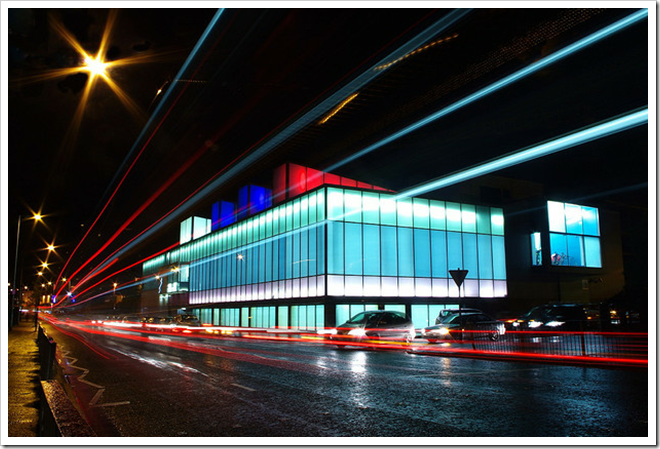 These trunks came in three sizes and their cut was so economical that if the customer got a small pair, decency was barely satisfied. This hardly mattered since there was no mixed bathing allowed, but as boys we always stood on tiptoe at the window to make ourselves appear as large as possible and we’d say, “large” more in hope than expectation. Another vexation was when the attendant tossed across a pair that had been laundered with the tapes tied in a knot or with the tapes missing.

Some boys ducked below the window to avoid payment and hoped to come across a pair of trunks and a wet towel by the poolside. I don’t know if they ever succeeded.

Surrounding the pool there were dressing boxes but these were reserved for adults. Boys were expected to change on the gallery and leave their clothes there. There was no need for security lockers. We had nothing worth stealing.