Geordie fixed things, all sorts of things, but for us kids growing up he was the main man for fixing bicycles. There was very little he didn’t know about bikes. He worked from a rather ramshackle lock up in Spinner Street just off the Falls Road in Belfast. At one corner of the street stood a hardware […] 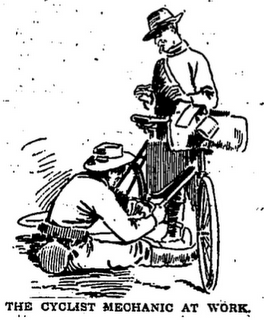 Geordie fixed things, all sorts of things, but for us kids growing up he was the main man for fixing bicycles. There was very little he didn’t know about bikes. He worked from a rather ramshackle lock up in Spinner Street just off the Falls Road in Belfast. At one corner of the street stood a hardware shop and on the other was the famous Dolphin chip shop renowned for delicious pies and it’s sit in booths known locally as boxes that were popular with couples after a night at the nearby Clonard Cinema.

Geordie’s workplace was a shrine to his trade. Wheel rims / hoops from long forgotten cycles hung from rusted nails along the side walls. There were nuts and bolts, spare brake blocks a plenty and oily chain links. On the top of his chaotic workbench he appeared to have amassed a selection of spanners for every conceivable occasion.

He worked at the front of the lock up, almost on the street. Very rarely would he venture into the murky depths of the lock up where bits of bicycle frames had been discarded until a use could be found for them. Nothing it seems was ever thrown away. Redundant sprockets, chains and the occasional worn saddle adorned the walls waiting for redemption.

Geordie himself was a painfully thin, angular man and it was only when he stood up from his low stool at the workbench that noticed how tall a man he was. His grey wispy hair was covered by a cloth cap set at an angle and he kept a cigarette dangling from his lips for such a long time that the ash curled before falling off.

Geordie didn’t like fixing punctures unless you were a girl for he was of the opinion that any male worth his salt was capable of this simple chore.

When you brought a problem bicycle to Geordie he had the annoying habit of shaking his head and almost mutters audibly as he diagnosed the problem and mentally decided how much the job was worth although I was convinced that he knew all this on his first sighting and the delay only added to the cost of repair. It was because of his pricing I came to the conclusion that there was much of this maintenance I could do for myself provided I had the tools and know how gleaned from watching how Geordie had tackled similar problems. When so young it never occurred to me that Geordie was in business and was not my personal charity whose sole purpose was to keep me on the road.

Usually repairs were completed quickly and you would be up and running within a couple of hours at the most. Sometimes he would send you away yet at other times he would be glad of the company.A bicycle would have to be in really poor condition for Geordie to want to keep it over night in the lock up.

I watched one afternoon as Geordie re-spoked a damaged wheel. He was a master craftsman at work. It was fascinating. Like a true artisan he made the whole process look so simple while using his body so effectively. He held the wheel rim between his knees, used the nimble fingers of both hands to hold and fit the spokes in place, conversed casually with anyone who was nearby and smoked his cigarette incessantly without inhaling. There was no doubting the fact that Geordie was an excellent fixer’ His repairs were top notch but he was a man for a particular time and as our post war society prospered demand for his skills declined rapidly and regretfully another era had passed us by.

5 Responses to Geordie the Fixer