This article is an extract from Raymond O’Regans excellent book Hidden Belfast. You can buy this book from Amazon (Kindle version also available) as well as local bookshops like Waterstones and Easons. 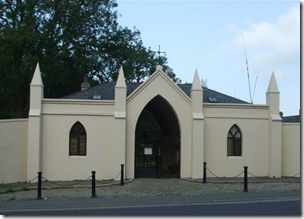 Many Belfast people have heard of Friar’s Bush Graveyard but may not be sure of its location. It sits beside the Ulster Museum on the Stranmillis Road and is on an ancient road out of Belfast. Some would claim that its history goes back to Saint Patrick’s time. There is even a stone purporting to come from this period; but this may have been engineered by the late Francis Joseph Bigger, the Belfast solicitor and renowned historian. The name implies a connection to a friary and a “Friars Bush” that still exists to this day. On an early map of Belfast, c1575, the only two buildings that can be identified are Belfast Castle and Friarstown, i.e. location of a friary. When the penal laws were introduced by the Dublin Parliament in 1691, catholics would meet in secret at Friars Bush to hear mass, which was banned under the Penal Laws. The site at that time was out in the countryside so there was less chance of the authorities discovering them.

In the 18th.century the catholic’s held their services at a Mr Kennedys’ house in Castle Street. The simple cabinet that was used by the priest when saying the mass survived and is in the vestry of Saint Mary’s Church in Chapel Lane. Before the permanent move to chapel lane, the Catholics also used a house in Squeeze Gut Entry (today called College Court).

In 1793 the Earl of Donegall leased land to them, in Crooked Lane (Chapel Lane) and in 1784 the first Catholic Church was opened in the town of Belfast. Many Presbyterians contributed to the initial building costs of the Church and Captain Waddell Cunningham and the Belfast Volunteers, all Protestants, formed a guard of honour and attended the first mass at the official opening of the chapel. The Volunteers also contributed a further £87 towards the building costs.

In 1828 the Earl of Donegall gave an extra acre of land to Friars Bush graveyard and enclosed it with a wall. At the entrance he added an attractive double sided gatehouse. It was now the main burial ground for the Catholic population; up to the opening of Milltown Cemetery in1869.

Many renowned members of the Catholic population are buried in this graveyard, for example Robert Read, founder of the “Belfast Morning News”,which began publication in Crown Entry, off High Street. Following the death of Read the paper was bought by Edmund Gray, proprietor of the Dublin paper “Freemans Journal”. He moved the production of the paper to Commercial Court and it was eventually absorbed into the “Irish News”. 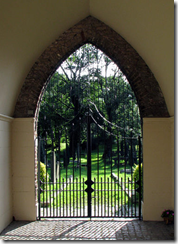 Jeremiah McAuley is buried in the graveyard. He was trained as an architect before entering the priesthood and used his skills in the design of Saint Peter’s Church, now a cathedral, located in a cul-de-sac, just off Albert Street.

Dan Miskelly was the proprietor of the Stags Inn at the corner of Rosemary Street and North Street from 1819 -1839 .He also advertised a “cheap”coach service from Belfast to Coleraine on Mondays, Wednesdays and Fridays. On the same advertisement he let his customers know that he owned the “Lark Inn” in Ballymena and the “Union Inn” in Coleraine’

Another name that should be familiar to Belfast people is Barney Hughes, the baker. At the height of his career he operated from a six story building in Divis Street and produced amongst many items the famous “Barney‘s Bap”. It was created to provide a cheap form of nourishment for the poor of the town. This was essential, especially in the period of the Great Irish Famine of 1845-51.

There is an area on the north side of the graveyard, referred to as cholera ground, were c.1,200 bodies are buried, victims of the many diseases(Typhus,Cholera,Dysentry ) that were rife in Belfast in1817, 1832/3 and in the period of the Great Irish Famine 1845/51.

On a lighter note, Barney Hughes’ famous bap won a place in the numerous Belfast street songs as can be seen from the following rhyme: “Barney Hughes’ Bread,

It’s not a bit of wonder 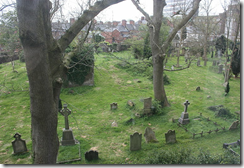 Barney Hughes, who lived in College Square North died in 1878 and will be remembered for his many acts of charity. The Ulster History Circle has placed a plaque on his former residence in the Square. He should also be remembered as a friend of the Reverend Henry Cooke, the father of Orthodox Unionism. When Barney Hughes, a catholic, married a Presbyterian it was his friend Henry Cooke who carried out the ceremony.

The ownership of Friars Bush Graveyard passed from the Catholic Church to the Belfast City Council and guided tours are available through the Belfast Welcome Centre.

← Memories of St Peters…
The Christmas Clubs of the Nineteen Fifties →