By Brendan on September 14, 2012 in Childhood, How we lived, People

Brendan McDade remembers some of the wonderful characters from his childhood. In this tale he tells the story of Mickey McCartan, the vegetable man. 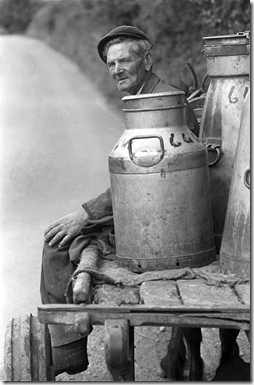 Sadly we were unable to find an image of Mickey, but this is a nice photo from the Bobby Hanvey Collection.

When I look back into the times that made me the person that I have become I feel a sense of wonder that my life should be shared by so many great people. For they were people long before they became characters, those lovely beings who shared, enriched our lives and generally made others feel good. At the time they were ordinary workers doing what they chose to do in order to feed their families. How some people become characters and not others is a debate for another day. It is suffice to say characters evolve over time. They were essentially different from all others; they were the person everyone wanted to be. Simple souls who enjoyed live in a way that was unconventional for us yet for them so ordinary, mundane and grey.

The character in our young eyes was vibrant, full of colour, someone to emulate or be with; a total contrast to our drab existence. They pushed the boundaries of language and fashion yet never crossed them. They revelled in looks of admiration and fascination from their public yet everyone at some stage has to come down to earth. Often characters have feet of clay that would set them firmly outside acceptable behaviour and they would be shunned by the community.

Mickey McCartan had a horse. It was a beautiful creature, all dappled and a grey nose that snuggled into your face and demanded attention. Mickey was the vegetable man. He brought fruit and vegetables to those in the district who wanted their goods at a price less than that of the corner shop.

Mickey himself was a tall angular man with a demeanour similar to that of his horse in the way he responded to the wishes of his customers in giving them what they wanted. He was after all a business man with a family to provide for.

But first the horse. It was beautiful and strong and not like the lithe horses that we saw in the cowboy films in the local cinema. This wonderful creature had a habit of looking over its shoulder at the feed bag ensconced beside the bench on the cart that the driver rarely had the opportunity to sit upon. Being a working horse it dragged a heavy four wheeled cart laden with fruit and vegetables around the streets six days a week. There were plenty of suitable buildings for stabling of horses in the local area.

The cart was a sturdy affair with four tyre wheels and apart from the clip clop of the horse’s hooves it made little or no noise. It travelled slowly and at a pace ideal for young boys to hop on the back for a free ride although Mickey was adept at using colourful language to keep the kids away. The fruit and vegetables were displayed along the sides of the cart in the boxes and sacks they had come from the market in. Potatoes occupied the space at the rear together with a large scoop, a set of scales and heavy black weights used for measuring. Most of the root vegetables still had some soil clinging to them while apples and oranges that had travelled from warmer the climates of Australia and South Africa continued to wear the tissue paper they had been packed in at the start of their journey to dreary Belfast. Local plump red tomatoes in boxes and enormously large onions in net bags vied for space and added cheery colours to the cart.

Very few people went to the cart to select their goods but relied on Mickey and his assistant Ginger who originally hailed from Boomer Street near the Pound Loney in Belfast to come to the door and take the order. While chatting to the house holder they would describe what was of good value at the particular time of year.

Mickey would rap the door loudly before walking into the living room. Most times he or his helper Ginger were expected for they were men steeped in routine. Mickey wore a peaked cap set at an angle and around his neck was the strap of his large leather money purse that seemed to be an essential part of him. I was always fascinated to wonder how much money it held. The main part held the coinage and he shook it expertly when he delved for change. Notes were secreted in a well worn wallet in his inside coat pocket.

When he spoke Mickey had the pitched authoritive voice of the merchant seller, loud and comforting. He knew how to sell, how to give and take, how to do business. Much to my mother’s delight he never missed an opportunity to voice his admiration of her wall pictures of far away palm treed islands. He enjoyed conversation and was a constant source of news from about the area. He was useful too. At Christmas time he was frequently requested to wring the neck of turkeys and chickens that had been sent up from the country for the festive season celebrations. He performed these chores expertly with the minimum of fuss.

Mickey McCartan, our vegetable man, was an iconic character who for a short period successfully bridged the gap between street trader and the big shop. It would prove to be an unequal contest and in the late fifties he ceased trading and our area was the poorer for it. He brought to the front doors what people wanted and in so doing he made many good friends who still have fond memories of him and Ginger. If only I could remember the name of the horse.

Do you know the name of Mickeys horse? Did you have a delivery guy coming to your door? Add a comment below: