By Brendan on September 17, 2012 in Childhood, How we lived, People

We may have thought Indians trying to sell you things was a modern invention. Never mind calling you up, back in the 50’s they used to come to your door

Brendan McDade tells the story of the brush salesman. 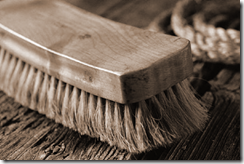 Other interesting people who came to our street in the fifties carried their wares along with them. One Asian gentleman whose name we never discovered was a frequent visitor. His soft brown skin was a novelty in itself but it was the perfectly wrapped turban that set him apart from the locals and made us stare in wonder at him. As a hawker he had sufficient English to encourage sales from his suitcase filled to overflowing with brushes of infinite variety together with a selection of combs. Some combs were for a large family while others were finely toothed and suitable for the more intimate detection of head lice that was prevalent at the time.

To say his suitcase was packed would be understating the obvious for our Indian salesman also carried a number of brush poles to give added value to his service although he never fixed the two parts of the brush together. He was a salesman and not a handyman so this chore was left to the householder to complete.

I was amazed at the number of different brushes he was able to squeeze into his suitcase; hair brushes, tooth brushes, floor brushes, nail brushes, deck scrubbers, brushes for dish washing, scrubbing brushes, yard brushes and those round headed brushes that looked so elegant beside the fire.

The seller would describe the use of every brush and demonstrate the softness or otherwise of the bristles and in his best accented English he set out to convince us that quality such as that set out before our eyes could not be bought locally even in the larger stores.

The fact that our Indian salesman returned to our street every few months is evidence of the effectiveness of his sales technique and of course the quality of his merchandise.

Do you remember door to door salesmen? Add a comment below: